For my latest marathon recap, I thought I about adding some inspirational running quote meme at the beginning, but I couldn’t find one that perfectly summed up how I felt about this race. I am the World’s Okayest Runner, and I would like to explain why I no longer want to run stupid long distances anymore. 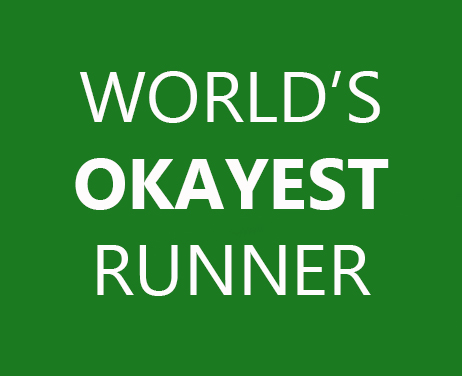 I want to preface this by saying that I worked with a coach for this training cycle, and she was amazing. I would not have even gotten to the start line at the Richmond marathon without her guidance and training plan. I hope my thoughts and feelings about running stupid long distancdes do not cast any negative light on her or her coaching.

I thought I had a more difficult time with my long runs during this training cycle. The heat and humidity never seemed to relent, and I ended most runs feeling like I just went through hell and back. I know a lot of people will say, “Those runs just mean you’ll go so much faster when it gets colder!” However, when each run feels like a battle and you end each one feeling sweatier than you ever thought possible, it can affect someone’s motivation and by someone, I mean, mine. I just felt defeated.

A month and a half before the race, I injured my left shoulder and had to refrain from cross training and strength training. I honestly haven’t the foggiest on what I did to injure my shoulder, which is the same one I hurt a week before the Pittsburgh marathon. Unlike the Pittsburgh marathon, this 2nd go around with the shoulder pain lasted a lot longer and felt way more intense. I could still run and do my training runs since I wasn’t swinging my arms around wildly as I ran.

The week before Richmond, I was finishing a track workout when my groin muscle felt tight but not pulled or anything. “Weird,” I thought that day but never gave it much thought. I had a pulled groin muscle 10 or so years ago, and this definitely did not give me the same “Oh Crap” feeling.

On Race Day, everything felt as good as it was going be. I did not wake up with any pain in my shoulder or groin. That second part turned out to not be true around mile 6 or 8 when I was making good time. My groin began to ache as I ran, and now and then, I shook my leg and hip out in a futile attempt to loosen something up.

The wind played a big factor in the race for me. While it wasn’t freezing weather or anything, it was chilly and the slightly above normal winds made it pretty darn cold at times. The absolute worst part of the marathon was the bridge, which ended up being the start of the Wall. As the wind whipped my face and made my fingers numb, I thought, “Well, this isn’t going to end the way you had hoped for.” All of us were running against the wind, and I am sure my eyes were not the only ones fighting watery eyes.

After the bridge, the Wall showed up, and from then on, it was a battle and I’m pretty sure I lost. My groin pain got worse, and around mile 21 or 22, the other side of my groin started hurting as well. I wonder if this is the result of the cold not letting up and my body never having gotten comfortable.

The downhill finish at the Richmond Marathon was supposed to be a welcome relief to runners at the end of the race. For me, the downhill finish line made my groin muscle scream, “ARE YOU KIDDING ME?” A volunteer coach toward the end saw my face and the struggle, and she ran with me for a short bit. I told her that my groin hurt, and she said, “After you finish, keep moving. Don’t stop moving.” The Richmond volunteers were absolute champs and amazing.

When I crossed the finish line, I unleashed what I was holding back for 18 or so miles. I started crying but not because I was overcome with emotion – I was overcome with pain. Some poor girl handed me my finisher medal and said “…. congratulations?” to me, as I took the medal from her. 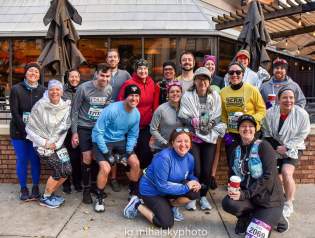 I was very cold before the race. 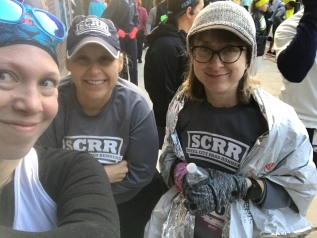 I can now say I am a four-time marathonner, and that’s how it’s going to be for the time being. For a hot minute, I thought I would train for a 5th marathon in the spring and perhaps do a 50K race in June, and then say See YA to long distances. As soon as I crossed the finish line, my face stained with tears, I knew that Richmond would be my last marathon for the time being. Between the shoulder and groin, I am not convinced that I am built for stupid long distances.

I am burnt out and disheartened. No matter how much effort I put forth and how hard I work for a marathon, I keep getting the same results. I am looking forward to dropping down to half marathons again. Plus, my busy season at work will be kicking into high gear very soon (like, as soon as I get back from Thanksgiving break). I need to take away any voluntary stressors since work is more important than running.

The beauty of all this is I get to figure out what I want to do next, and then work on achieving that goal with a smile on my face and a spring to my step.

I want to end this recap by memorializing some of the cool things I saw during the Richmond marathon race: 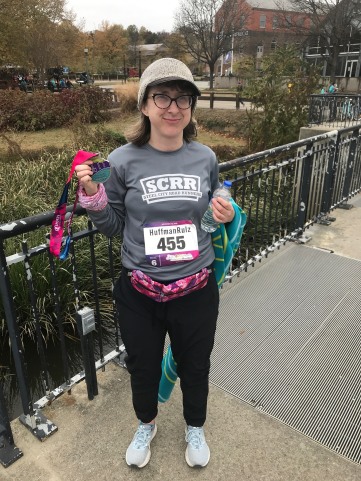 I’m trying to smile here but it might be more of a grimace. 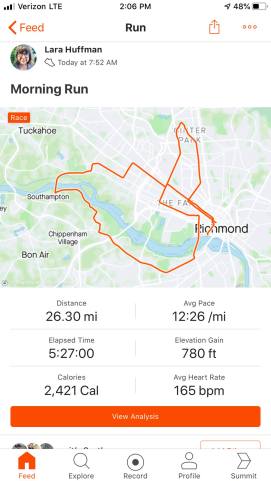