The recent death of Diem Brown, and the headlines regarding her death from cancer made me really think about the over-usage of the battle and fighter metaphors when we discuss someone’s death from cancer.   If you do a google news search for Diem’s name, then pretty much all the headlines talk about her losing her fight or battle.

Anyone who even just casually followed Diem’s story knew that she had a positive attitude and a strong will to live.  She dealt with cancer since the age of 23 until her death at 32, and she became an advocate for those with cancer.  She blogged about her experiences, and she created the website MedGift.   I don’t want to focus solely on the death of Diem, especially in light of the fact that she used the warrior and fighter language, and one could assume that she would approve of the headlines about her death.

I NEED PRAyErs and advice my doctors are seemingly giving up but I won't & can't rollover. Whatever option I have to LIVE I'm grabbing!

Need prayers, advice, support & outreach. No is not an option. Contact @alicialquarles We know there is hope & help pic.twitter.com/08yS0iIOZq

However, if you look up news stories regarding the death of high-profile figures who died of cancer, you will come across this language: Elizabeth Edwards, Adam Yauch, Roger Ebert, to name a few.  I also hope I don’t come off as critical of anyone who draws strength from using the fighting and warrior language to describe what they are going through.  Everyone is entitled to use whatever language they want to describe their own experiences, and I really don’t want to come off as the Word Police.  My point of contention is the use of this language when someone dies of cancer.

When we use the language that someone “lost a long battle/fight” with cancer, it suggests that someone in remission from cancer must have done something more than the one who died.  Someone who dies of cancer did not lose or give up or somehow lost any will to keep on living.

It’s not the battle part that bothers me – it is the losing part. For those who ultimately die from a cancer, the idea that they have lost a battle implies to me that if they had just done something else differently then maybe they might have won [emphasis mine]. The use of the word, “lose” is like a zero-sum game to me: if someone or something loses then that means that someone or something else wins. You can’t have a loser if you don’t have winner. We should not so easily give cancer that kind of power over us.

A November 3, 2014 Independent item discussed the use of the battle metaphor in respect to those at the end of life.   The article discussed the findings of a study conducted by Elena Semino, a professor of linguistics and verbal art, who “analyzed 1.5 million words of discussion, representing the views of around 200 people closely involved with cancer care.”

Professor Semino remarked, “The battle metaphor applied at the end of life clearly can have harmful consequences for some people who end up feeling responsible for the fact that their illness cannot be treated.”  She also commented: “The metaphor somehow needs to account for the fact that you can live well with cancer.  There has to be another way to talk about someone who has died of cancer.”

Heather Cleland wrote in an August 16, 2011 piece in Walrus Magazine:

The language around cancer — of “battles” fought, won, lost, and succumbed to — fails to consider the sheer chance of it all [emphasis mine]. Sure there are cancers that we bring upon ourselves, but most are a result of the tiniest bits of bodies going rogue for reasons we’ve yet to understand. To speak of lost battles as though the warrior didn’t want victory badly enough projects our proclivity to control outcomes onto something that cannot be controlled. It’s futile, and it does a great disservice to people like Jack and Rachel who “fought” as hard as I did.

I don’t view the fact that I’m currently NED for breast cancer as a reflection of anything I did.   I cringe, and typically correct, when someone remarks about how I “beat” cancer.  I haven’t beat cancer, won or kicked its ass.  Until I die of something else, we don’t know if cancer is done with me.  I am in remission from cancer, or I’m NED.  I feel incredibly uncomfortable at any phrasing or hyperbole about what happened to me that paints me in some warrior, extreme fighter.  I was often tired, sad and scared, all of which are normal and to be expected.  I didn’t fight harder than someone else with the same diagnosis as me and who went on to have a recurrence.

Cancer is a complex, intelligent and dangerous disease, and we have given way too much credit to someone’s mindset for a positive outcome.  If a fighting spirit and positive attitude cured cancer, I’m pretty sure that Diem Brown would be alive and healthy.  Everyone also could probably name five people they’ve known who died of cancer who had a positive and fighting spirit, too.  Cancer does not care about that.

When I read the obituary for my #bcsm friend, Barb, who died of metastatic breast cancer, the last sentence made me smile, despite feeling very sad about her death:

Barb did not lose her battle with cancer; she lived graciously and courageously with it until the very end.

During this year’s Pinktober, did you happen to come across the “1 in 8 women will develop breast cancer in their lifetime” statistic?  Here are three screen caps with this statistic: 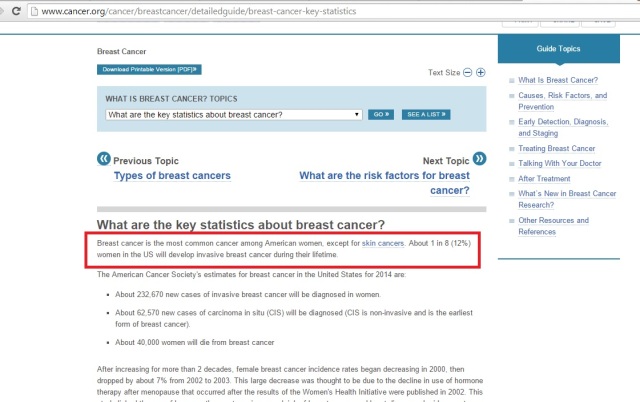 I actually learned recently that this 1 in 8 statistic is actually a teensy bit misleading.   Lifetime risk isn’t the same of your actual risk based on your age.  You know what blows my mind?  I found actual scientific information explaining this statistic on Susan G. Komen’s website (I know, knock me over with a feather):

So next time you come across the “1 in 8 women will develop breast cancer in her lifetime,” keep in mind the second part of that statement: “who live to the age of 85.”

I don’t know why charities and organizations use that statistic so much and with little explanation.  Maybe they want to scare people into thinking breast cancer is going to happen to everyone or maybe they don’t really understand the lifetime risk vs. absolute risk?

My friend AnneMarie, over at Chemobrainfog, wrote:

One in eight is a good springboard for a fundraising campaign.  It makes for a great way to terrorize those who do not understand that the number applies across your entire lifetime and it increases with age.  As you are seated around your table with eight family members of different generations or eight close friends, don’t try to figure out who, unless you also incorporate WHEN into the equation.

There are certain factors that increase your risk of developing breast cancer, and I fell in several of those categories: family history, dense breast tissue, certain benign (not cancer) breast problems and not having children (and related to that, not breastfeeding).  No doubt that these factors definitely increased my risk more than the 0.4 percent figure stated above.    Plus, now that I’ve had breast cancer, I’m also at an increased risk for developing breast cancer again.  Since treatment ended, I have made changes to my lifestyle, such as running and not drinking alcohol, among others, to minimize my risk because I never ever want to go through that again.

Cancer can often feel like a numbers game, although many doctors and specialists in the field will emphasize that you are an individual, not a stat.  When you fall on the bad side of these statistics, these numbers almost seem cruel.  I had less than one percent chance of going into anaphylaxis during chemo, yet that happened to me.  Cancer is definitely not something I ever wanted to be unique at.

I truly believe it’s important for us to know our risks and what we can do to minimize our risks for developing breast cancer.   First, we need to fight through the Pink Ribbon rhetoric seemingly designed to scare the general public with statistics without little or no context.