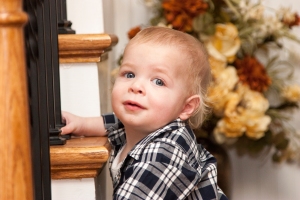 Can you guess which one is Andrew’s grandfather? The other kiddo in the pic is my dad.

What is Cystic Fibrosis?

Cystic fibrosis is an inherited disease characterized by the buildup of thick, sticky mucus that can damage many of the body’s organs. The disorder’s most common signs and symptoms include progressive damage to the respiratory system and chronic digestive system problems. The features of the disorder and their severity varies among affected individuals.

Mucus is a slippery substance that lubricates and protects the linings of the airways, digestive system, reproductive system, and other organs and tissues. In people with cystic fibrosis, the body produces mucus that is abnormally thick and sticky. This abnormal mucus can clog the airways, leading to severe problems with breathing and bacterial infections in the lungs. These infections cause chronic coughing, wheezing, and inflammation. Over time, mucus buildup and infections result in permanent lung damage, including the formation of scar tissue (fibrosis) and cysts in the lungs.

I have to raise $500 pages before the Pittsburgh Half, and I’m very short of my goal.  I need your help – either a donation or a share on Facebook or Twitter would be great appreciated.  I mean, come on. Look at his face.  Here’s the link to my crowdrise page, or my Booster page.  If you buy a Get Up Swinging T-shirts, all proceeds go to the CFF.  I don’t make a single penny in profit.