I generally don’t participate in these BUT… Haha, you should not have liked or commented. Now you have to pick from one of these below and post it as your status. This is THE 2015 BREAST CANCER AWARENESS game. Don’t be a spoil sport, pick your poison from one of these and change your status, 1) Damn diarrhea 2) Just used my boobs to get out of a speeding ticket 3) How do you get rid of foot fungus 4) No toilet paper, goodbye socks. 5) I think I’m in love with someone, what should I do? 6) I’ve decided to stop wearing underwear 7) it’s confirmed, I’m going to be a Mommy/Daddy! 8)Just won $900 on a scratch card. 9) Its final, we’re moving to Mexico to be beach bums! Post with no explanations.

Oh dear goodness.  Not this bullshit again.  Why is this still a thing?   Why hasn’t this “game” been killed in a fire? You know what I want to do whenever I see this form of slactivism in my social media news feeds.

You know what I think whenever I see this pop up in any of my news feed: you could care less about breast cancer, and I need to unfriend you right the hell now.  I’m not even kidding.  If anyone who knows me  and what I have gone through (i.e., lumpectomy, chemo, radiation and double mastectomy) can participate in such a game and not realize how demeaning and offensive this is to anyone going through breast cancer treatment.  I never saw what I went through as some cutesy game, and I certainly don’t view my mother’s death from this disease as LOL.

The above instructions are not awareness. This is offensive. Breast cancer is not a joke, awareness does not come from sharing the color of your underwear or your marital status (the whole “tee-hee, wink-wink” attitude adds to my disgust). Even if it ended up on TV, that still would not be educating people about breast cancer they didn’t know before. All it does is show the world that lots of people are willing to post silly things as their status updates.

Education underlies awareness. To even call something a game and honestly believe it’s doing anything to help any aspect of this disease is delusional.

While you’re playing games, (mostly) women are dying of metastatic breast cancer.   We have been running and racing for a cure that has not happened.   Where’s the cure?  The below infographic is proof of how little most people know, despite all this awareness. 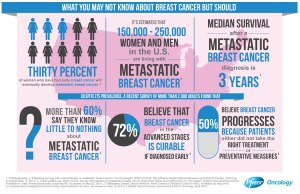 50 FREAKING PERCENT believe that breast cancer progresses because patients either did not take the “right” treatment or preventative treatments.  Are you kidding me?   That is unacceptable.  Is this why we treat those living and dying of metastatic breast cancer as some dirty little secret nobody should talk about because most people think they brought it upon themselves?   That is so far from the truth that it should be filed under fiction.

Did you know that 30 percent of those diagnosed with early stage breast cancer have a metastatic breast cancer, i.e., the breast cancer that kills?  WAS THAT FACT RELAYED TO YOU WHILE YOU’RE PLAYING THE GAME?

Awareness does not save lives.  It doesn’t.  Despite recent media articles telling you that breast cancer rates have dropped, don’t believe the screaming headlines.

Frankly, I’m tired breast cancer being portrayed as the feel good cancer and being held up as a shining example for early detection which works sometimes or most times but not all the time and that part of the messaging is conveniently left out of every discussion about early detection. It’s buzzkill, it detracts from the message that mammograms are helping save lives. Mammograms are detecting cancer earlier and earlier thanks to the constant improvements being made in the imagine, but early detection is just that. Early Detection. Early detection is not a guarantee.

If you or anyone really want to help, tell these Facebook game players to sign this petition.   “I ask that Komen commit at least 50% of total donations to medical research and innovation rather than to awareness and education. I request all other breast cancer non-profits do the same.”  Donate to Metavivor.  Do something meaningful.

Just don’t play these games.  Please.  Can you really play a game making light of the deaths of so many?