When I was in middle school and high school, I played sports but I was never good at them.  I probably would go as far as to say I stunk.  Pretty sure my family members who went to my softball games would also agree.  As soon as I turned 16 and could find a part-time job, I said good-bye to softball and began working at the local amusement park.

In an effort to get back into pre-cancer shape, at the recommendation of two dear friends, I joined this couch to 5K training group.  I had been pushing myself on the treadmill at my local gym in summer 2013.  Every time I pushed myself faster or longer, I felt so proud of myself, also fighting the urge to high-five other people at the gym.

High five me!  Come on, man!   I had breast cancer, and I’m recovering from months of reconstruction.  This is HUGE.

Both of my friends, who ran marathons and half-marathons, kept encouraging me to keep running but go beyond the treadmill.  Since they obviously knew what they were talking about, I listened and I’m glad I did.   Six months later, I just ran 5.5 miles on New Year’s Day with a group of runners, and I made good time.  Running to me is an individualized sport.  I’m at the point where I’m not trying to win in my age group.  I just want to improve my own time.  Sure, winning would be nice, but finishing the race is all that matters. 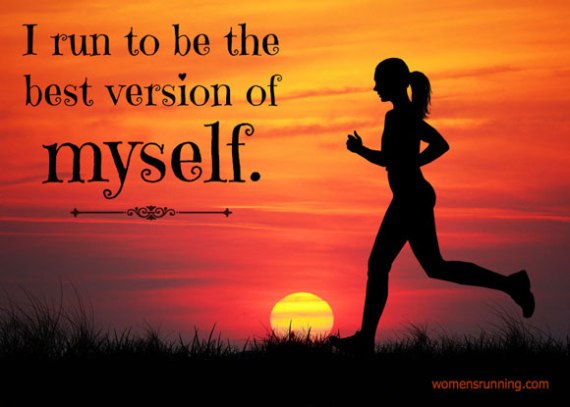 On top of the physical benefits, the mental benefits have been greater.  When I’m running, I’m not worrying about my job, my family, my relationship or what I have to do at home to keep it from turning into a pigsty.  While running, I think about my body, like where my arms are, bringing my knees up higher, making sure my hips are pulled in and my butt isn’t sticking out.  Running, for me, is like meditation.  My brain takes a breather while my body is being pushed to its limits.

Meanwhile, those few women who were the most active, sweating vigorously for up to 10 hours each week, realized an even greater benefit, with 25 percent less risk of developing breast cancer than those women who exercised the least.

A 25 percent risk reduction isn’t nothing to sneeze at, no sir.

For the study, researchers at the University of North Carolina at Chapel Hill compared 1,500 women with breast cancer to more than 1,550 women without breast cancer who were part of the ongoing “Long Island Breast Cancer Study Project” that looked at environmental causes of the disease.

The researchers found that women who exercised during their reproductive years or following menopause reduced their risk of developing breast cancer. The greatest risk reduction was found in women who exercised 10 to 19 hours per week (or two hours each day for five days), but a woman’s risk was reduced for all levels of exercise intensity, even light. Exercise appeared to reduce the risk of hormone receptor positive breast cancers, which are the most commonly diagnosed tumors among U.S. women.

That article mentioned “hormone receptor positive breast cancer,” as the most commonly diagnosed tumors.  Indeed, New York Times specified that er+ (the type of breast cancer I had) consisted of approximately 75 percent of breast cancer diagnoses.

I came across this Washington Post article written by a woman who also went through breast cancer treatment.  Elizabeth H. MacGregor wrote:

There was virtually nothing I could control about the nightmare of my cancer, I thought. But give me one thing that I can take charge of, that I can do — that I love to do — and I’m going to ride as if my life depends on it.

Ding, ding, ding.  That’s it, at least for me.  When it came to my cancer treatment, I had little to no control of what happened to me and what I had to endure.  Ms. MacGregor again wrote:

Some women are empowered by a cancer diagnosis, but I was not. I only felt vulnerable. While I trusted the medical professionals caring for me and the treatments I received, I found my role to be unsettlingly passive. Cycling allowed me to be an active participant in my treatment; it gave me agency in my recovery.

I took my doctors’ advice, and I underwent the treatment they suggested in an “unsettlingly passive” role.  Sure, I could have said no or kept looking for a doctor who would eventually tell me what I wanted them to tell me.  I went the conventional route with the conventional treatment, and I have no regrets.  The control aspect has come after treatment, and running is something I can control.  I decide whether or not I put my running shoes on.

While I don’t know if I’ll ever go through cancer treatment again, I at least know I’m making it harder for breast cancer to catch me.